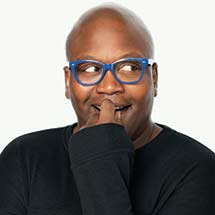 Appears on: Tituss Burgess in Concert

Emmy- and SAG-nominated actor, musician, and writer Tituss Burgess is quickly emerging as one of the entertainment industry’s most versatile and dynamic performers, with his work in television and theater generating both critical and commercial acclaim.

Burgess most recently appears in Netflix’s Dolemite Is My Name, alongside Eddie Murphy, Keegan Michael Key, Mike Epps, and Craig Robinson. The film tells the story of performer Rudy Ray Moore, who assumed the role of an iconic pimp named Dolemite during the 1970s. Burgess previously appeared in the Netflix romantic comedy Set It Up alongside Taye Diggs, Lucy Liu, Glen Powell and Zoey Deutch. Burgess also lent his voice to two major studio films: The Angry Birds Movie and Smurfs: The Lost Village.

The actor was first introduced to television audiences in Tina Fey's Emmy®-winning NBC series 30 Rock, where he played the scene-stealing D’Fwan, a vivacious hairdresser and the sidekick of Angie Jordan (Sherri Shepherd). Burgess quickly became a breakout star in the series’ fifth and sixth seasons. His other television credits include A Gifted Man, Blue Bloods, and Royal Pains.

A veteran of the stage, Burgess made his Broadway debut in 2005 as Eddie in Good Vibrations. Since, he has held many memorable roles on the Broadway stage including Hal Miller in Jersey Boys, Sebastian the Crab in The Little Mermaid, and Nicely-Nicely Johnson in the 2009 revival of Guys and Dolls.

Burgess recently acquired the rights to the beloved film The Preacher’s Wife. The movie turned Broadway musical will include an original score and lyrics by Burgess and a book by Azie Dungey.

Burgess recently debuted his third album, Saint Tituss, on July 26, 2019. In its opening week, it was No. 16 on the Billboard Top 100 album sales chart.