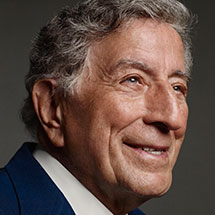 Tony Bennett is an artist who moves the hearts and touches the souls of audiences. He’s not just the singer’s singer but also an international treasure honored by the United Nations with its Citizen of the World award, which aptly describes the scope of his accomplishments.

The son of a grocer and Italian-born immigrant, Anthony Dominick Benedetto was born on August 3, 1926, in the Astoria section of Queens, New York. He attended the High School of Industrial Arts in Manhattan, where he nurtured his dual passions, singing and painting. His boyhood idols, Bing Crosby and Nat King Cole, were big influences on Bennett’s easy, natural singing style. Tony sang while waiting tables as a teenager then performed with military bands throughout his overseas Army duty during World War II. After the war, the GI Bill enabled him to study vocal technique at the American Theatre Wing School. He first sang in a nightclub in 1946, sitting in with trombonist Tyree Glenn at the Shangri-La in Astoria.

Tony’s big break came in 1949, when comedian Bob Hope noticed him working with Pearl Bailey in Greenwich Village. As he recalls, “Bob Hope came down to check out my act. He liked my singing so much that after the show he came back to see me in my dressing room and said, ‘Come on kid, you’re going to come to the Paramount and sing with me.’ But first he told me he didn’t care for my stage name (Joe Bari) and asked me what my real name was. I told him, ‘My name is Anthony Dominick Benedetto,’ and he said, ‘We’ll call you Tony Bennett.’ And that’s how it happened. A new Americanized name, the start of a wonderful career and a glorious adventure that has continued for sixty years.”

With worldwide record sales in the millions, Tony has received seventeen Grammy Awards including the prestigious Grammy Lifetime Achievement Award. The MTV generation took to Tony Bennett during his appearance with the Red Hot Chili Peppers on the 1993 MTV Video Awards. He appeared on MTV Unplugged and the recording of the same name earned him the Grammy Award for Album of the Year. “Tony Bennett has not just bridged the generation gap,” observed The New York Times, “he has demolished it. He has connected with a younger crowd weaned on rock. And there have been no compromises.”

His initial fame came via a string of Columbia singles in the early 1950s, including such chart-toppers as “Because of You,” “Rags to Riches” and a cover of Hank Williams’ “Cold, Cold Heart.” He has placed two-dozen songs in the Top 40, including “I Wanna Be Around,” “The Good Life,” “Who Can I Turn To (When Nobody Needs Me)” and his signature hit, “I Left My Heart in San Francisco,” which earned him two Grammy Awards. One of only a few artists to have albums chart in the 1950s, ’60s, ’70s, ’80s, ’90s, and the new millennium, he’s introduced multitudes of songs into the Great American Songbook that have become pop music standards. Upon the release of his boxed set collection, Tony Bennett: The Complete Collection, the New York Times commented, “we aren’t likely to see a recording career like this again.” Bennett made music history when, at the age of 86, he became the oldest artist to achieve a No. 1 record on the Billboard charts with his Duets II CD. Tony Bennett is a Kennedy Center Honoree and an NEA Jazz Master. Tony has authored four books, his official biography, two books devoted to his artwork, and the latest New York Times bestseller, Life is a Gift.

Tony is a dedicated painter whose interest in art began as a child. He continues to paint daily, even while touring. He has exhibited work around the world, and three of his original paintings are part of the permanent collection of the Smithsonian Institution in Washington, D.C.

Throughout his career, Tony Bennett has always put his heart and time into humanitarian concerns. He’s raised millions for the Juvenile Diabetes Foundation. His original paintings each year grace the cover of the American Cancer Society’s holiday greeting card. He received Martin Luther King Center’s “Salute to Greatness Award” for his efforts to fight discrimination. The United Nations presented him with their 2007 Humanitarian Award.