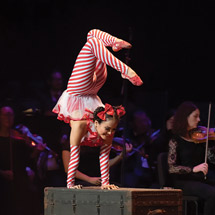 Troupe Vertigo encompasses the wide spectrum of the performing arts including performances at Theaters, Concert Halls, Festivals and Special Events.

Troupe Vertigo has been creatively involved with renowned maestros like Jack Everly and Jeff Tyzik, having contributed to the theatrical sensibilities of numerous world-class symphonies.

Their unique perspective on the circus arts has led to a variety of speaking engagements including with The Center Theater Group Los Angeles, Directors Lab West, TEDX Talk and The Chicago Contemporary Circus Festival. They have also appeared in the cover story of Dance Teacher Magazine (August 2016) and in the book Ordinary Acrobat.

Troupe Vertigo premiered its first show in Los Angeles Big Top for a New Generation in 2010 at the Ford Amphitheater with a young rock n’ roll group – Nightmare & The Cat, featuring Django and Sam Stewart.

The company returned to the Ford Amphitheater in 2012 with Nighthawks: A Film Noir Circus, inspired by American Jazz, Edward Hopper paintings and the gritty streets of crime novels from Hammett to Chandler.

2016 brought the creation of TABLEAUX originally presented by the Dance Resource Center at the Bootleg Theater in Los Angeles. TABLEAUX features five women inquiring about confinement and freedom, while finding themselves constrained on an island of boxes, trapped by the constrictions of society and themselves.

Troupe Vertigo’s facility is also home to Cirque School, LA’s premier circus training space, which inspires an appreciation for the circus arts for “Anybody with Any Body.”

Due to their Los Angeles home and having Cirque School as their sister company Aloysia and Rex’s expertise are used often for the film & television industry. Most notably for Rebel Wilson’s aerial performance in Pitch Perfect 2 and with Reese Witherspoon and Christoph Waltz who utilized Cirque School resources not only for circus instruction but for character background research for the film Water for Elephants.