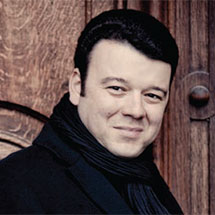 Vadim Gluzman last appeared with the Oregon Symphony on October 12, 2015, when he performed Sofia Gubaidulina’s Offertorium with Conductor Matthew Halls.

Vadim Gluzman’s extraordinary artistry brings to life the glorious violinistic tradition of the 19th and 20th centuries. Gluzman’s wide repertoire embraces new music, and his performances are heard around the world through live broadcasts and a striking catalogue of award-winning recordings exclusively for the BIS label.

Highlights of the current season include appearances in London at The Proms with the BBC Symphony and Edward Gardner, with the Chicago Symphony under Neeme Järvi, the NDR Elbphilharmonie Hamburg under Christoph von Dohnányi, the Deutsches Symphonie-Orchester Berlin under Tugan Sokhiev, and with the Orchestre de Paris under Juraj Valčuha. Mr. Gluzman appears in New York’s Carnegie Hall with the Orpheus Chamber Orchestra and leads performances of the ProMusica Chamber Orchestra in Columbus, OH, where he continues his third year as creative partner and principal guest artist.

This season, Gluzman gives world premieres of concertos by Sofia Gubaidulina with the NDR Radio Philhamonic in Hannover under Andrew Manze, and by Elena Firsova with Deutsches Symphonie- Orchester Berlin under Tugan Sokhiev.

Accolades for his extensive discography include the Diapason d’Or of the Year, Gramophone’s Editor’s Choice, Classica Magazine’s esteemed Choc de Classica award, and Disc of the Month by The Strad, BBCMusic Magazine, Classicfm, and others.

Vadim Gluzman plays on the legendary 1690 “ex-Leopold Auer” Stradivarius on extended loan to him through the generosity of the Stradivari Society of Chicago.