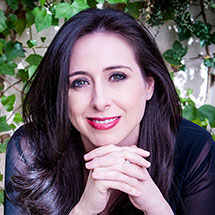 About Venezuelan-American pianist Vanessa Perez, The Washington Post called it right: “Vanessa Perez is not to be taken lightly.” Ms. Perez has been praised for a bold, passionate performing style allied to musicianship of keen sensitivity.

Perez has performed across the United States, Latin America, and Europe. She has performed with musicians such as pianists Gabriela Montero and Ingrid Fliter, cellist Jan Vogler, and conductors Gustavo Dudamel, John Axelrod, Enrique Batiz, Gustav Meier, James Judd, David Gimenez Carreras, and Diego Matheuz. Among other high-profile experiences in the studio, Perez joined superstar violinist Joshua Bell for his At Home with Friends album, released by Sony Classical in 2009. She also teamed with Jan Vogler for the cellist’s 2008 Sony album, Tango! As a solo artist, the pianist has recorded for VAI – “Presenting Vanessa Perez” – and received high praise for her Telarc recording of Chopin, The Complete Preludes, reaching No. 5 on the Billboard charts. The Washington Post wrote: “Perez dove into the Preludes as if discovering them for the first time, flinging them out into the hall with a kind of wild intensity that was often breathtaking.” Her most recent recording, Spain, was released by Steinway & Sons in 2016, and described thusly by Fanfare magazine: “The main thing to note is that the piano is stunningly played and extremely well recorded . . . this is an enjoyable program, the music making vital, and Perez is clearly a musician of distinction.”

Recent performance highlights have included appearances at the International Keyboard Institute & Festival in New York, the Gilmore International Keyboard Festival, concerts with the Orquesta de la Juventud Simon Bolívar under Gustavo Dudamel in Caracas, Conductor Nikolaj Znaider and the Teresa Carreño Youth orchestra, and the Casals Festival with Diego Matheuz. She participated in the Chopin Festival in Mallorca and was guest soloist on a tour with the Youth Orchestras of the Americas under the batons of Carlos Miguel Prieto and Jean Philippe Tremblay.

A frequent performer throughout the Americas, Perez has performed in the cultural capitals of Mexico, Brazil, Argentina, Colombia, Uruguay, and Peru, as well as with symphony orchestras in the U.S. from Miami to Minnesota to Vermont and in recital from Manhattan to Miami to San Diego. She has performed at the Palau de la Música in Barcelona, the Montpellier Festival in France, Konzerthaus in Berlin, the Beethoven-Haus in Bonn (Germany), Wigmore Hall in England, and the Gothic Hall in Belgium, as well as the famed Teatro Colón in Buenos Aires.

Vanessa Perez began her studies in Caracas, Venezuela, at the age of seven at the Colegio Emil Friedman. She has degrees from the Royal Academy of Music in London, and Yale University. She studied with Peter Frankl, Christopher Elton, Lazar Berman, and Ena Bronstein.

Performances in the 2016–17 season include recitals in the US, chamber music collaborations with the Dalí Quartet in Memphis, with violinist Daniel Hope in Canada and the US, with Pianist Stephen Buck in Puerto Rico and Latin America, and pianist Gabriela Montero in Girona, Spain. She was featured in Amazon’s series Mozart in the Jungle, performing Olivier Messiaen’s Turangalîla with Gael Garcia Bernal and Ondist Suzanne Farrin. Vanessa Perez is a Steinway Artist.