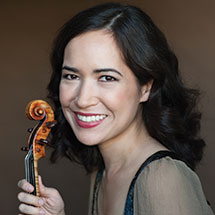 With this concert, Viviane Hagner makes her debut with the Oregon Symphony.

Born in Munich, violinist Viviane Hagner has won exceptional praise for her highly intelligent musicality and passionate artistry. Ms. Hagner performs with “poise and magnificent assurance” (The Times/London) and “an almost hauntingly masterful display of technique and artistry” (Washington Post). Bringing her own unique sensibility to performances, she has proven herself an artist of effortless virtuosity on the stages of the greatest concert halls in the world.

Since making her international debut at the age of 12 – and a year later participating in the legendary joint concert of the Israel and Berlin Philharmonics, conducted by Zubin Mehta – Viviane Hagner has become known for her substantial and beautiful sound as well as her thoughtful interpretations. She has appeared with the world's great orchestras, including the Berlin Philharmonic, Boston Symphony, New York Philharmonic, and Chicago Symphony Orchestra, in partnership with conductors such as Claudio Abbado, Daniel Barenboim, Pinchas Zukerman, and Esa-Pekka Salonen.

In addition to bringing insight and virtuosity to the core concerto repertoire, Viviane Hagner is an ardent advocate of new, neglected, and undiscovered music. In 2002 she gave the world premiere of Unsuk Chin's Violin Concerto with the German Symphony Orchestra Berlin and Kent Nagano, later playing the work in Berkeley – an event which prompted The San Francisco Chronicle to praise her performance as “vibrant, warm-toned and jaw-droppingly precise [and] may well be unimprovable.”

The Hyperion label has issued her performances of Vieuxtemps’ Violin Concertos Nos. 4 and 5, and the Canadian company Analekta released her recording of Unsuk Chin's Violin Concerto with Kent Nagano and the Montreal Symphony Orchestra.