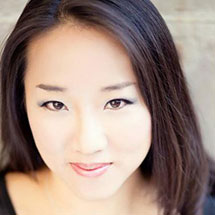 Award-winning coloratura soprano Yungee Rhie has been acclaimed for possessing a shimmering, sparkling voice that is highlighted by her exquisite artistry and moving stage presence. Bloomington Herald Times has commended her Olympia (Les contes d'Hoffmann) as “terrifically funny and vocally agile.” The Herald Times has also recognized her portrayal of the Fairy Godmother (Cendrillon) as “enthusiastically and rightfully applauded for her vocal pyrotechnics.” Yungee also has been celebrated for having “scored heavily, eliciting extended applause from the packed house” for her Lakmé performance. Most recently, the Opera Insider raved over Yungee's Marie (La fille du régiment): “Great charm and bel canto style by Korean soprano Yungee Rhie whose liquid trill alone will get her very far”.

Last season, she started off in Los Angeles, making a recording with ChoEun Lee, piano, and Michael Couper, saxophone, on the world premiere of John Plant's Insomnia. Yungee was invited once again by Gyeongsang Opera (Korea) to make a role debut of Adina in L’elisir d’amore in addition to singing as the soprano soloist in Handel's Messiah with VK Chamber Orchestra and Choir. In March, she portrayed the coquette Valencienne in the operetta The Merry Widow with Gyeongsang Opera, and in May, she was invited as the soprano soloist in Mozart's C Minor Mass with Collegiate Singers.