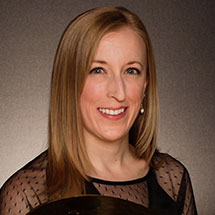 Alicia Waite joined the Oregon Symphony horn section in 2008. Prior to winning her post in Oregon, she held positions with the Virginia Symphony and the Civic Orchestra of Chicago. Alicia has also enjoyed playing with the Seattle Symphony, the Milwaukee Symphony, and the San Francisco Symphony, including their 2015 European tour. During the summer months, Alicia performs at the Oregon Bach Festival, and she has previously performed with Santa Fe Opera, Grand Teton Music Festival, and the Britt Festival Orchestra. In addition to her symphonic work, Alicia is an avid chamber musician. She enjoys opportunities to perform with small ensembles featuring her Oregon Symphony colleagues, and she was a guest artist at the Chintimini Chamber Music Festival in Corvallis in 2015.

Though born in Bend, Alicia grew up primarily in Fort Collins, CO, where she studied horn with Jack Herrick. After finishing high school, Alicia moved to the Midwest to continue her formal musical education. She earned her B.M. from Lawrence University as a student of James DeCorsey. Alicia continued her graduate studies at Northwestern University, where she earned an M.M.; her primary teachers were William Barnewitz (former principal horn of the Milwaukee Symphony) and Gail Williams (former associate principal horn of the Chicago Symphony). Alicia has also studied with British horn soloist Michael Thompson, as well as Daniel Gingrich, acting principal horn of the Chicago Symphony.