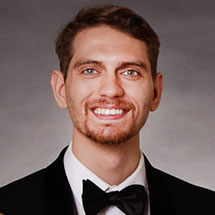 Casey Jones studied music at the New England Conservatory in Boston with Norman Bolter, former trombonist of the Boston Symphony, and at the University of Maryland with Craig Mulcahy, principal trombone of the National Symphony Orchestra. Previous to school he studied with Brian Plitnik. Prior to his appointment to the Oregon Symphony, he played two seasons with The Florida Orchestra, one as second and one as principal. He has also played with the Jacksonville Symphony and the Sarasota Opera.