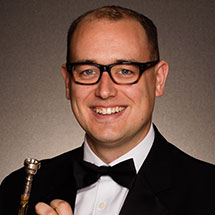 Before moving to Portland, he held the position of Assistant Principal Trumpet with the Louisiana Philharmonic Orchestra in New Orleans, where he performed and taught trumpet for over five years.

While in Louisiana, he played over 150 weddings at various area churches and venues, and was the Chief Trumpeter at the famous St. Louis Cathedral in Jackson Square. He also played in a popular Dixieland jazz band and accompanied countless traditional New Orleans second line parades for weddings, funerals, and other local events.

Doug is an active and passionate music educator. Currently, he coaches students of the Portland Youth Philharmonic and Metropolitan Youth Symphony. He has instructed students of all levels, from beginners to advanced college and professional players. He served as adjunct instructor at the University of New Orleans, taught private lessons at the New Orleans Center for Creative Arts, and led masterclasses and performed guest artist recitals at several major American schools of music.

He studied at the UMKC Conservatory of Music and Dance in Kansas City, MO, and at Indiana University's Jacobs School of Music in Bloomington. His primary teachers (aside from numerous musical relatives!) were Keith Benjamin, John Rommel, Jeff Bailey, Peter Wood, and Jeff Nelsen.

Doug grew up in a musical family in Sioux City, IA. His mother is a singer and his father is a violinist. His brother, Charles, has been the bass trombonist of the Oregon Symphony Orchestra since 2007.