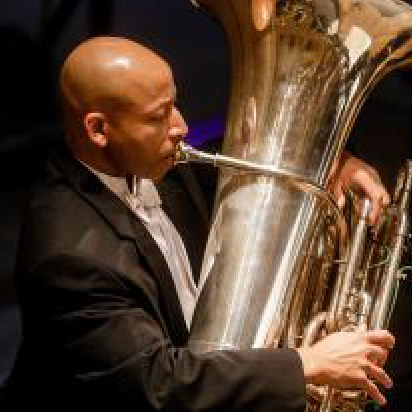 JáTtik Clark began his professional music career as Principal Tuba of the Oregon Symphony in the fall of 1999, after being chosen for the position in May of the same year, at age 23. Since then, he has also become active as a chamber musician, soloist, instructor, and clinician both locally and nationally.

As an orchestral tubist, JáTtik has been invited to perform with the Chicago, Baltimore, Pittsburgh, Detroit, Grant Park, and Seattle symphonies. His varied chamber music experience includes performances and recordings with numerous groups including Pink Martini, Big Horn Brass, Third Angle Music Ensemble, Chamber Music Northwest, and the Chamber Music Society of Lincoln Center. He has performed as a featured soloist at the Grand Teton Music Festival, Vancouver (WA) Symphony, and the Corvallis-OSU Symphony, in addition to the Oregon Symphony. He also gave the Northwest premiere of Oregon Symphony Pops conductor Jeff Tyzik’s Dance Suite for Tuba and Orchestra with the Portland Columbia Symphony. Additionally, JáTtik was featured as a guest co-soloist with the “Pershing’s Own” United States Army Band in Washington, D.C.

JáTtik also serves as Co-Principal Tuba of the Grand Teton Music Festival in Jackson Hole, WY, and Principal Tuba of the Sunriver Music Festival. He also holds the teaching position of Applied Tuba-Euphonium Instructor at Portland State University and Lewis & Clark College, along with being Co-Instructor of Tuba-Euphonium at Oregon State University.