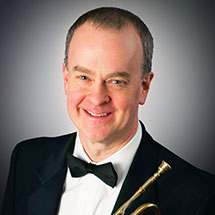 Jeffrey Work joined the Oregon Symphony as principal trumpet in the fall of 2006, following 13 years as an active freelance musician in the Boston area. Since 1999, he has also served as principal trumpet of the Colorado Music Festival in Boulder. As an orchestral musician, Jeff can be heard on several recordings, most notably as a featured performer on the Oregon Symphony’s acclaimed 2011 release, Music for a Time of War. Other performances include Stravinsky’s Petrouchka and Mahler’s Symphony No. 6 with the Boston Philharmonic, as well as performances with the Boston Symphony, the Boston Pops, and the Boston Modern Orchestra Project.

In addition to his orchestral duties in Portland and Boulder, Jeffrey Work performs concerto and chamber repertoire as his busy schedule will allow. His reputation has grown steadily, and the press frequently praises him for playing with an artistry not often associated with his chosen instrument. Notable solo credits include concerto appearances with Mstislav Rostropovich at the Rencontres Musicales d'Évian in Evian, France, and with the National Symphony Orchestra in Washington, DC. He has given solo performances with the Oregon Symphony, the Colorado Music Festival Orchestra, the Boston Chamber Music Society, the Boston Philharmonic Orchestra, and the United States Army Band, as well as regional, community, and festival orchestras throughout the country. In 1997, during his third solo engagement with the Missouri Chamber Orchestra, Jeff recorded the Haydn Trumpet Concerto. In 1998, the Pro Arte Chamber Orchestra of Boston featured him in the world premiere of Eric Ewazen’s Concerto for Trumpet and String Orchestra; in 2003, Pro Arte joined Work in premiering the Concerto for Trumpet by James M. Stephenson.