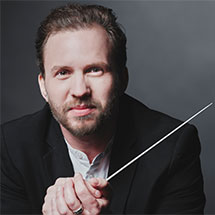 In February 2021, Oregon Symphony announced David Danzmayr as its new Music Director. Danzmayr is widely regarded as one of the most talented and exciting conductors of his generation. He is a prize-winning conductor who has appeared with orchestras at some of the most prominent concert halls across Europe, North America, Australia, and the UK, and in major cities across the US, from Portland, San Diego, and Houston to Chicago, Indianapolis, and St. Louis. He first guested with the Oregon Symphony in 2018 and returned as guest conductor in 2019.

David Danzmayr is widely regarded as one of the most talented and exciting European conductors to emerge from his generation. As the newly appointed Music Director of the Oregon Symphony, Danzmayr begins his tenure there with the 2021/22 season.Danzmayr also stands at the helm of the versatile and innovative Pro Musica Chamber Orchestra Columbus; and he holds the title of Honorary Conductor of the Zagreb Philharmonic Orchestra.

Early in his career, while Music Director of the Illinois Philharmonic Orchestra in Chicago, Danzmayr was lauded regularly by both the Chicago Tribune and Chicago Classical Review for his performances which always featured a work by an American composer on every program.

This season Mr. Danzmayr makes debut appearances with the St. Louis Symphony and the Ulster Orchestra Belfast in addition to return visits to the Iceland Symphony and the Odense and Aalborg Symphonies in Denmark.

His widely acclaimed tenure as the Assistant Conductor of the Royal Scottish National Orchestra in Glasgow was the launch for a career that has seen him conduct in the major European concert halls - the Musikverein and Konzerthaus in Vienna, the Grosses Festspielhaus Salzburg, and Usher Hall Edinburgh as well as the St Magnus Festival in the Orkney Islands.

Danzmayr received his musical training at the University Mozarteum in Salzburg where, after initially studying piano, he went on to study conducting in the class of Dennis Russell Davies. He finished his studies with the highest honours. He was also strongly influenced by Pierre Boulez and Claudio Abbado in his time as conducting stipendiate of the Gustav Mahler Youth Orchestra and by Leif Segerstam during his additional studies in the conducting class of the Sibelius Academy.

Subsequently he gained significant experience as assistant to Neeme Järvi, Stephane Deneve, Carlos Kalmar, Sir Andrew Davis and Pierre Boulez, who entrusted Danzmayr with the preparatory rehearsals for his own music.