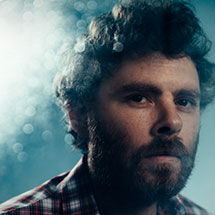 Appears on: Beethoven's Eroica Symphony – The Right to Be Forgotten (a folk opera in one act) – World Premiere

Gabriel Kahane stunned Symphony audiences in 2018 with his oratorio emergency shelter intake form, which examined inequality through the twin lenses of housing and homelessness. Now, Kahane joins the Symphony as Creative Chair, a mutli-faceted role in which he will not only write and perform three substantial works, but also serve as an advisor for contemporary programming on the Classical Series. And crucially, he will produce two new concert series: Open Music, a composer-driven chamber series to be held in smaller Portland venues, and an indie concert series in which marquee pop artists will collaborate with dynamic composers and orchestrators.

In the 2019/20 Season, Kahane premiered Pattern of the Rail, six orchestral settings from his 2018 album Book of Travelers, as well as the full orchestral version of “Empire Liquor Mart (9127 S. Figueroa St.)”  from his acclaimed 2014 album The Ambassador. He returns in November 2022 to perform an Oregon Symphony commission and world premiere, The Right to Be Forgotten (a folk opera in one act).

For the Open Music Series, Kahane invites a composer or musician featured on the Symphony’s classical program that weekend to examine their creative approach by curating a concert of their own design with music as well as art in other forms that inspires their work. Kahane appears on stage as moderator, friend, conversationalist, and occasionally a cameo performer; a small ensemble from the Oregon Symphony serves as house band. The Open Music Series debuted on March 13, 2020, and featured Pulitzer Prize-winning composer Caroline Shaw.  The series continues in January 2023 and features composer/musician Nathalie Joachim as host and co-curator.

In describing his new position, Kahane emphasizes that, “Governing all of my planned curatorial activities with the orchestra is a desire to see an increasing commitment to new music at the Oregon Symphony, and, in particular, music written by marginalized voices. I take that responsibility seriously, and also consider it a gift to help introduce Portland to so many dynamic voices who are making essential music of the 21st century.”

The morning after the 2016 presidential election, Gabriel Kahane boarded a train at New York’s Penn Station and traveled just under 9,000 miles around the continental United States, talking to dozens of strangers while drinking in the rich landscape of the country. The resulting album, Book of Travelers (Nonesuch), is an intimate musical travelogue, hailed by Rolling Stone as “a stunning portrait of a singular moment in America.”

A singer-songwriter, pianist, and composer, Kahane works at the blurred edges of journalism, ethnography, storytelling, and music. This season, he begins a three-year term as the inaugural Creative Chair of the Oregon Symphony, which commissioned his 2018 oratorio, emergency shelter intake form. A sprawling exploration of inequality through the lens of housing and homelessness, emergency shelter was performed last summer at the Grant Park Music Festival in Chicago, and will be heard this season in performances by the Orlando Philharmonic, as well as by the Detroit and Milwaukee Symphonies. A commercial recording, featuring the Oregon Symphony, will be released in early 2020.

Other highlights of the season include the premiere of Pattern of the Rail: Six Orchestral Songs from Book of Travelers with the Oregon Symphony and Louisville Orchestra, as well as solo concerts at the Luxembourg Philharmonie and Konservatoriets Koncertsal in Copenhagen. In March he welcomes Pulitzer Prize-winner Caroline Shaw as the first guest on his new Oregon Symphony concert series, Open Music,and he reunites with her in May for a concert with the Attacca Quartet at the Phillips Collection in Washington, D.C. A song cycle with a text by poet and frequent collaborator Matthew Zapruder, written to commemorate the 40th anniversary season of San Francisco Performances, will receive its premiere in April, and a choral work, co-commissioned by the Los Angeles Master Chorale and The Crossing, receives its world premiere at Disney Hall in May to close out the season.

Active in theater since childhood, Kahane made his Off-Broadway debut in 2012 with music and lyrics for February House at the Public Theater in New York. In 2014, he wrote and starred in the BAM Next Wave Festival production of The Ambassador, directed by Tony and Olivier Award-winner John Tiffany. A study of Los Angeles seen through the lens of ten of its street addresses, The Ambassador was also released as an album by Sony Masterworks. Last season, he made his Broadway debut with a score for Kenneth Lonergan’s The Waverly Gallery, starring Elaine May, Michael Cera, and Lucas Hedges.

Over the last decade, Gabriel has worked in an array of diverse musical spaces. Memorable projects have included tours with Andrew Bird and Punch Brothers; recordings with Sufjan Stevens, Phoebe Bridgers, and Blake Mills; and an arrangement of “Bridge Over Troubled Water” written for Paul Simon’s Farewell Tour in 2018. As a composer, he has been commissioned by the Los Angeles Philharmonic, the Saint Paul Chamber Orchestra, Orpheus Chamber Orchestra, and Carnegie Hall. Gabriel is also a regular guest on American Public Media’s Live From Here with Chris Thile.

A graduate of Brown University, Gabriel is married to a wonderful woman named Emma. They live in Brooklyn with their daughter, Vera Rose, whose age is still being counted in months, and a self-possessed tabby cat named Roscoe Greebletron Jones III.

Creative Chair is sponsored by Michael, Kristen, and Andrew Kern, and Anna Sanford