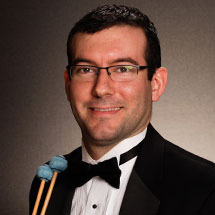 Michael’s other notable engagements have included fellowships with the Verbier Festival Orchestra, Spoleto Music Festival, Schleswig-Holstein Music Festival, National Orchestral Institute, Music Academy of the West, and the Tanglewood Music Center, where the Boston Globe hailed him as a “fearlessly accomplished performer.”

Michael began his musical studies on piano at the age of eight, and percussion at age ten. He later moved to Boston, where he earned a B.M. from the New England Conservatory, and his M.M. from Boston University. Michael’s principal teachers were J. William Hudgins and Timothy Genis.

In his free time, Michael enjoys publishing and learning the piano and chamber works of his grandfather, composer Arnold Mysior. He also enjoys performing with Portland-based ensembles 45th Parallel, Third Angle, and FearNoMusic. When not in front of an instrument, he can be found golfing, playing video games, or exploring the Pacific Northwest.