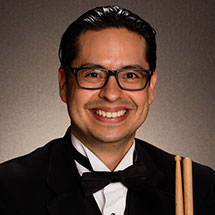 Sergio Carreno joined the Oregon Symphony as a member of the percussion section in 2012. Hailing from Miami, FL, Sergio developed an eclectic musical taste which has led to collaboration with symphony orchestras, theater productions, dance companies, chamber music ensembles, and Latin, rock, and jazz bands.

Sergio has performed with The Cleveland Orchestra, Pittsburgh Symphony, St. Paul Chamber Orchestra, and San Francisco Symphony, among others. He toured the U.S. several times with the Dallas Brass, and has appeared as a soloist with the Oregon Symphony and the New World Symphony. Sergio was a New World Symphony fellow for four seasons under the direction of Michael Tilson Thomas, with whom he performed in Europe, South America, New York’s Carnegie Hall, and on PBS Great Performances. He holds Bachelor and Master of Music degrees from Carnegie Mellon University, a student of Timothy Adams Jr.

Sergio is married to Oregon Symphony violinist Lisbeth Carreno, and together they enjoy trying to keep up with Portland’s ever-growing food scene.