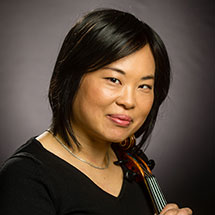 Chien Tan joined the Oregon Symphony as Principal Second Violin in September 1999. Chien’s eclectic musical interests extend far beyond the classical realm, and her versatility has been featured in a number of different musical genres. She recently performed at Teatro ZinZanni in Seattle, an innovative combination of improvisational comedy, vaudeville revue, music and dance, with elements of the circus mixed in. She was also concertmaster of the Henry Mancini Institute Orchestra (a jazz orchestra) and worked as a studio recording musician at Fox and Warner Brothers in Los Angeles.

In March 2005 Chien performed on National Public Radio’s “All Things Considered” playing the treble violin, a 20th-century instrument tuned one octave higher than a standard violin. Chien is one of only a handful of people to play the treble violin and has established herself as one of the leading treble violinists of her generation. She also created a music video in which she performed Vivaldi’s “Goldfinch” concerto on the treble violin.

At the age of 23, Chien was appointed section violin to the Pacific Symphony, a position she held for five years. She performed with Opera Pacific, Santa Barbara Chamber Orchestra, Long Beach Symphony, and orchestras for visiting Kirov, Joffrey, and the Royal Danish Ballet. In 1999 she performed with the Grammy Awards orchestra with the late Luciano Pavarotti, Vince Gill, Celine Dion and members of Aerosmith. She has also performed onstage with Josh Groban and was involved with two Sony Classical recordings. During that time she also served as occasional violin and string coach for youth orchestras in Orange County, Calif.

Chien has been a member of the Oregon Symphony String Quartet, featuring the string principals of the symphony. Her most recent solo performance with the Oregon Symphony was in 2005. She has participated in the Grand Teton, Oregon Bach and the Colorado Music Festivals.

A native of Nova Scotia, Canada, Chien earned a bachelor’s degree from the Cleveland Institute of Music, spending summers at the ENCORE School for Strings. Her principal teachers were David Cerone and David Updegraff. She received a full scholarship at the California Institute of the Arts, where she earned her master’s degree studying with Elizabeth Baker, a member of the Los Angeles Philharmonic.

Chien performs on an 1897 Guilio Degani violin, made in Venice, Italy.