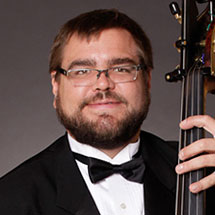 Colin won the 2003 ISB Orchestral Competition, which led to a one-week internship with the Detroit Symphony, and placed third in that competition in 2001. He was also a recipient of the Interlochen Double Bass Class Studio Award in 1997, which has since been renamed The Colin Corner Award in his honor.

A graduate of the Interlochen Arts Academy, he received his training at Indiana University as a student of Lawrence Hurst. An avid teacher himself, Colin has served on the faculty of Morehouse College, and has been a visiting artist at the University of Texas at Austin. Additionally, he was a founding faculty member at the NorCal Orchestra Studies Academy of the Golden Gate Bass Camp in San Francisco. Currently, he teaches at Portland State as an adjunct instructor.

Colin also counts playing jazz and many different styles of music as a passion outside the orchestra. In Portland he has worked with Ron Steen and Michael Kissinger among others. He also has played with singer/songwriter Noah Kite. Proud of his instruments, he plays on a bass made by Joseph Hill, c. 1780, and a bass made by Albert Jakstadt in 2001.