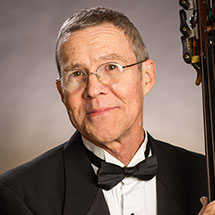 Bassist Don Hermanns has pursued an interesting and diverse career. A graduate of the Curtis Institute of Music in Philadelphia, Don has been a guest artist at many music festivals including Aspen, Marlboro, La Jolla Summerfest, the Grand Teton Music Festival, Astoria Music Festival, the Oregon Bach Festival, and others. Don toured with the British super-group Emerson, Lake & Palmer, playing both double bass and bass guitar; he also toured with pop star Engelbert Humperdinck, playing bass guitar and arranging music. While he lived in southern California, Don played on many major movie soundtracks.

Don was a member of the San Diego Symphony from 1984 to 1996, and was also principal bass of the San Diego Chamber Orchestra for several seasons; during this period he met his future wife, Susan, when she performed with the orchestra as a piano soloist.

Don was the creative consultant and composer for the award-winning video, “The Nature of Sound.” He also created, produced, and founded ARC Publishing, which distributes Don’s Accompanied Rudiments Course, a practicing tool for bassists. He has been a member of the Oregon Symphony since 1997 and is serving his second term on the OSO board of directors. Don is also an adjunct professor of Double Bass at Reed College, and maintains a private teaching studio.

Don is married to pianist and scholar Dr. Susan D. Smith. They have two sons, Alan and Scott; a dog (Molly), 2 cats (Abbie and Maurice), and a busy life.