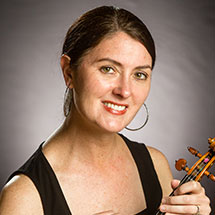 Erin Furbee joined the Oregon Symphony as assistant concertmaster in 2001. Prior to her arrival in Portland, she was a member of the Colorado Symphony for eight years and also played with the Milwaukee Symphony for a season. Originally from the Chicago area, Erin began studying the violin at age four with Rebecca Sandrok; she also studied with George Perlman and Betty Lambert. She attended the University of Michigan, received her B.M. from Rice University, and went to the University of Minnesota for graduate school. Erin’s main teachers include Camilla Wicks, Raphael Fliegal, Jacob Krachmalnick, and Roland and Almita Vamos. She has performed as a soloist with the Oregon Symphony, the Colorado Symphony, the Southeast Iowa Symphony, the Chintimini Music Festival Orchestra, the University of Minnesota Symphony Orchestra, and in December 2009 she performed the Beethoven Triple Concerto with the Yaroslavl Philharmonic in Yaroslavl, Russia.

In addition to her great love for performing classical music, Erin enjoys playing tango music, a passion she developed after hearing the music of Astor Piazzolla in 1997. While living in Denver, she and fellow bandoneón player Evan Orman co-founded a four-piece tango group called Extasis and traveled to Buenos Aires in 1999 to study with musicians in many of the tango orchestras there. She has since made several more journeys to Argentina and feels very lucky to have been able to work with Jose Bragato, Piazzolla’s cellist and arranger on a CD project for piano trio called Bragatissimo. In 2001, she formed Tango Pacifico, a five piece band which specializes in the music of Astor Piazzolla. In June 2012, Erin performed the Four Seasons by Piazzolla with the Chintimini Festival of Music in Corvallis, and with the Southeast Iowa Symphony in 2011. Erin also plays with the Alex Krebs Tango Quartet, which often performs at milongas for dancers and has been featured at Portland’s Tangofest and Valentango.

Erin is also an avid chamber musician and teacher. She was a member of Fear No Music for five seasons, and performed with the Bellingham Chamber Players for several years. She taught a class at PSU on orchestral repertoire and auditions and has given master classes at universities throughout Oregon and Washington. She enjoys teaching and maintains a private studio in Portland. Erin’s summers include traveling and performing at the Bellingham Festival of Music and the Chintimini Music Festival in Corvallis. Her hobbies include cycling, hiking, reading, traveling and microbiology.