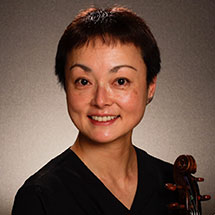 Violinist Fumino Ando joined the Oregon Symphony in 2002. Born in Aichi, Japan, Fumino earned her B.M. from Toho Gakuen School of Music in Tokyo, an Artist Diploma from Southern Methodist University in Dallas, and an M.M. from the University of Oklahoma. Prior to joining the Oregon Symphony, Fumino played with the New World Symphony in Miami, and served as the assistant concertmaster with the Oklahoma City Philharmonic.