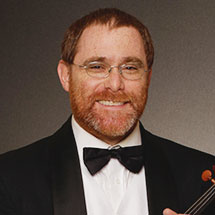 Greg Ewer, hailed by The New York Timesfor his “refinement and spirit,” has been a member of the Oregon Symphony since 2001. Greg is also well known to Portland audiences for his regular appearances with the Portland Baroque Orchestra, Third Angle New Music Ensemble, and Pink Martini. He is also the founder and artistic director of 45th Parallel, a highly acclaimed chamber music series founded in 2009, featuring musicians of the Pacific Northwest.

Greg has appeared as a guest recitalist at Yale University, and at the National Library in Mexico City. He has performed at numerous summer festivals, including the Tanglewood Music Center, San Luis Obispo Mozart Festival, Grand Teton Music Festival, Moab Music Festival, and the Montana Baroque Festival.

Greg’s 2014 recording of the Complete Sonatas for Two Violins of Jean-Marie Leclair with his longtime collaborator Adam LaMotte was described as a “landmark recording” and hailed for its “zest and athleticism” by The Stradmagazine. In addition to his performing activities, Greg is on the music faculty of Reed College in Portland.