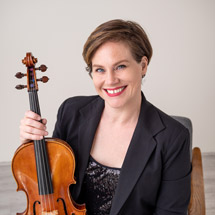 Hillary Oseas is known for her versatility as a performer throughout the Pacific Northwest. She has been Principal Violist for the Portland Opera Orchestra since 2012, core violist for Portland Baroque Orchestra since 2014, and has worked as a substitute/extra musician for the Oregon Symphony since 2001. She is also sought out as a chamber music partner by many local organizations, including 45th Parallel and Fear No Music.

Born in Roseburg, Oregon, violist Hillary Oseas took an interest in music at an early age, showing promise on both piano and violin. After her family moved to the Portland area, Hillary studied with long time Oregon Symphony violinist Eileen Diess. Mrs. Diess encouraged Hillary to seek opportunities to play music with others, and Hillary is an alum of both Metropolitan Youth Symphony and Portland Youth Philharmonic. After participating in a “side by side” concert with Oregon Symphony Musicians as a teenager, Hillary was hooked, and became determined to make music her career.

Hillary made the switch to viola as a student at Portland State University, where she studied with Oregon Symphony Principal Violist Joël Belgique. She completed her Bachelor of Music degree at the University of California, Santa Barbara, with the renowned teacher Helen Callus. Ms. Oseas received numerous accolades as a student at UCSB, including winning a concerto competition to perform with the UCSB Orchestra, and a Distinguished Performance Award for her work with UCSB’s Ensemble for Contemporary Music. She was recipient of the Young Artist String Quartet Fellowship for her entire duration as a student, an honor usually reserved for graduate students. Ms. Oseas went on to earn a Master of Music Degree from Rice University as a student of highly esteemed violist James Dunham, with whom she studied historically informed performance as well as modern viola. During Hillary’s final year as a student, she was Mr. Dunham’s teaching assistant, and performed as a core member of Mercury Baroque Orchestra.

Hillary lives in Beaverton with her husband Robert and two sons, Harold and Charlie. In her spare time, she loves to run outdoors, and enjoys participating in community road races a few times per year. She is delighted to be spending the season with the Oregon Symphony, the orchestra she has loved since childhood.