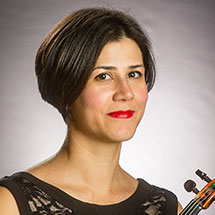 Violinist Inés Voglar Belgique was born to a Slovenian family in Venezuela, where she studied music under the program “El Sistema” and violin with Roberto Valdes. She came to the United States in 1996 to complete her undergraduate and graduate studies at Duquesne University and Carnegie Mellon University with Andrés Cárdenes, then concertmaster of the Pittsburgh Symphony. Before joining the Oregon Symphony in 2004, she played two seasons with the Pittsburgh Symphony as an extra musician, including national and European tours. She also served as guest concertmaster of the Galicia Symphony Orchestra in December 2007 and has been a frequent concertmaster of the Astoria Music Festival Orchestra.

In September 2012 she won the position of assistant principal second violin with the Oregon Symphony in a national audition. An avid chamber musician, she has been a violinist in FearNoMusic since 2005 and served as artistic director until 2011, reaching out to collaborate with internationally acclaimed composers and presenting the music of Oregon and the Pacific Northwest. In addition to private studio teaching, she is a faculty member at the Interlochen Adult Chamber Music Camp, the Oregon State University Chamber Music Workshop, and Portland Summer Ensembles. She also conducts the Young String Ensemble of Portland Youth Philharmonic, and she joined the faculty of Lewis & Clark College in the fall of 2015.