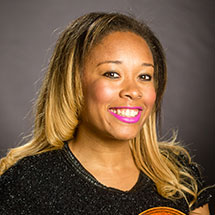 Cleveland, Ohio native Jennifer Arnold joined the Oregon Symphony viola section after graduating from the Cleveland Institute of Music in 2005. She is a vocal advocate for diversity in classical music and is a member of the Sphinx Symphony Orchestra and the Gateways Festival, organizations that showcase the contributions that black and brown artists have brought to classical music.

Jennifer believes access to arts education is essential and has recently finished her tenure as state chapter president of the American String Teachers Association of Oregon, in addition to being on the faculty of the Sphinx Performance Academy and Portland Summer Ensembles. She spent 2016–17 on sabbatical and accepted a position as the first Sphinx Diversity Fellow pursuing a career in arts administration.

Outside of the Oregon Symphony, Jennifer has had the pleasure of being a BIG for Big Brothers/Big Sisters of Oregon, volunteering for the African American Health Coalition, and is currently a member of the Urban League of Portland YPs.

Among Jennifer’s most notable achievements was to premiere Two Romances for Viola and Orchestra by the incredible Black American composer Adolphus Hailstork with The Cleveland Orchestra while she was in high school.