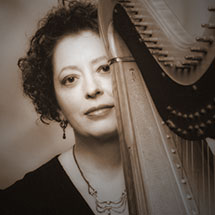 Ms. Craig has performed as a guest artist with the Portland Opera, the Britt and Sunriver music festivals, the Mt. Angel Bach Festival, the Oregon Mozart Players, and with chamber ensembles in Europe and on the East Coast. She has performed as principal harp with Chamber Music Northwest, in Portland, and with the International Music Festival in Seattle.

Ms. Craig can be heard on numerous Oregon Symphony recordings and on the Oregon Back Festival’s Grammy Award-winning recording of Pendercki’s Credo. She is featured in solo and ensemble performances on Ensemble Giverny’sWaterlilies.

Ms. Craig is Instructor of Harp at Lewis & Clark College and Oregon Episcopal School. Her harp duo, DjinnJenn, conducts workshops and master classes throughout the Northwest.