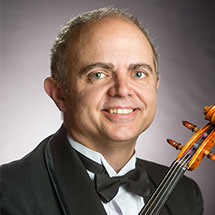 Joël Belgique found his voice at age 13, when he switched from violin to viola. Born in Lansing, Michigan, and raised in Salt Lake City by French parents, he began studying viola with Mikhail Boguslavsky and David Holland. Later, Joël attended the Eastman School, and earned a B.M. from the Cleveland Institute of Music, where he studied with Heidi Castleman. At Brigham Young University, Joël worked with Clyn Barrus and David Dalton, earning an M.M. in Performance and Pedagogy.

Joël acted as principal viola of the Oregon Symphony 1997 to 2021. He has appeared as soloist with the orchestra in works by Bach, Telemann, Mozart, Berlioz, Strauss, and Hindemith. The Classical Beaver’s 2011 review of the Symphony’s performance of Hindemith’s Trauermusik singled out Joël’s “trusty viola oozing mournful warmth and buttery sound.” As a chamber musician, Joël has performed with Elmar Oliveira, Leonard Pennario, Igor Gruppman, and Bayla Keyes, among others. For 14 years, he has also been a member of fEARnoMUSIC.

Joël spends his summers teaching and coaching at the Interlochen Chamber Music Camp for Adults in upstate Michigan, and has performed at a number of summer festivals, including the Spoleto (Italy), Mainly Mozart, Grand Teton, Strings, and Colorado music festivals.

Joël’s recordings on the North Pacific Music label include Jack Gabel’s Hellenic Triptych for solo viola and electronics, and Tomas Svoboda’s Trio Chorales for violin, viola, and piano. With fEARnoMUSIC, Joël has recorded works of Bonnie Miksch, including the premiere of a commissioned duet, Somewhere like you, my darling, for Joël and his wife, violinist Inés Voglar. In 2011, Joël released his first solo CD, “Mid-Century Modern,” which features sonatas by Clarke, Bauer, Avshalomov, and Svoboda.

Joël has also frequently performed and recorded with Pink Martini, appearing with them at Carnegie Hall, Disney Hall, the Hollywood Bowl, and on “Late Night with David Letterman.”