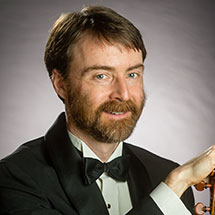 Jonathan joined the Oregon Symphony in the fall of 1992 and has been twice featured as a soloist with the orchestra. A recipient of the Oregon Symphony’s Creative Empowerment grant, Jonathan presented his play “The Wooden Boy” with the Tears of Joy Puppet Theatre, which introduces Béla Bartók’s 44 Duets for Two Violins to family audiences. Jonathan’s recording of the duets is available at cdbaby.com.

As a member of the Essex Quartet, Jonathan Dubay has performed chamber music concerts throughout the U.S., including appearances at Lincoln Center’s Alice Tully Hall and the Aspen Music Festival, as well as live radio broadcasts on WNYC, WQXR, and WGBH’s “Morning pro Musica.” Jonathan also performs with his chamber group, the Three Centuries Ensemble.

Jonathan’s wife is a violinist and their two children also play string instruments; together they comprise a family string quartet. In addition to his active performing schedule, Jonathan teaches violin at his home studio, lotsofbow.com.