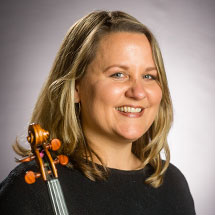 Raised in the Pacific Northwest, Julie Coleman studied violin with Raphael Spiro (himself a student of the great Leopold Auer), before gaining admittance to The Juilliard School at age 17. While in New York, she was awarded the Gluck Fellowship and her quartet was invited to perform in Alice Tully Hall. Before she graduated, Julie took her first national audition and won a job with the Oregon Symphony. Julie has been a member of fEARnoMUSIC, has taught at Lewis & Clark College and Portland State University, and has toured internationally with chamber orchestras including Mainly Mozart and the American Sinfonietta. Julie can also be heard on a number of recordings; when not playing classical music, she occasionally performs with Portland-based band Pink Martini, both at home and on the road.

In a performance as guest concertmaster of the Portland Columbia Symphony Orchestra, Julie’s playing was described by Oregon Music News as “…one of the highlights…lovely.” She has appeared as a soloist with the Oregon Symphony, Chico Symphony (now the North State Symphony), Aspen Young Artist Orchestra, and Portland Youth Philharmonic, among other ensembles.

Julie is a member of the Grand Teton Music Festival in Jackson Hole, Wyoming, where she performs chamber music with her distinguished colleagues at Walk Festival Hall. When she was a student, Julie spent her summers at the Meadowmount School of Music, the Quartet Program, and the Aspen Music Festival and School.

Julie plays on a beautifully restored G.B. Rogeri violin made in 1667.