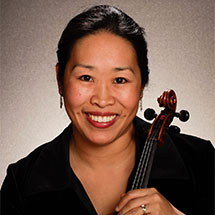 A native of Vancouver, BC, Keiko Araki was inspired to begin violin lessons at age seven after seeing Itzhak Perlman on “Sesame Street.” She received her B.M. from the Vancouver Academy of Music and a Graduate Performance Diploma from the Peabody Institute in Baltimore. Her major teachers were Lawrie Hill, Gwen Thompson, and Herbert Greenberg.

Keiko began her professional orchestral career in 1996 as a substitute with the Vancouver (BC) Symphony Orchestra. Prior to joining the Oregon Symphony in 2004, she was a member of the Delaware and Alabama symphony orchestras. Since moving to Portland, Keiko has performed with several Oregon ensembles and music festivals, including the Oregon Bach Festival, fEARnoMUSIC, the Oregon Ballet Theatre orchestra, and the Astoria Music Festival. Her interest in non-classical genres has led to recordings with Pink Martini, The Decemberists, Storm Large, and The Stolen Sweets.

Keiko is also a member of Portland Taiko, the Asian-American drumming ensemble. While she finds taiko very challenging, both for its physicality and honing her improvisational skills, there's nothing Keiko enjoys more after a long day of symphony rehearsals than beating on a giant drum with big wooden sticks.

In her spare time, Keiko enjoys knitting, knitting, and knitting. Her yarn “stash” is slowly taking over a room in her home, and she has managed to convert several of her symphony colleagues into knitting addicts. When she’s not knitting, Keiko uses her husband Adam as a guinea pig for culinary experiments, and takes naps with their cat, Zoot.

Learn more about Keiko at www.portlandtaiko.org.