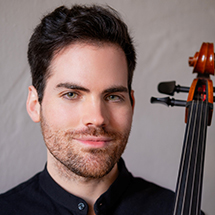 Kevin Kunkel joined the Oregon Symphony in 2016 upon completing a fellowship with the New World Symphony in Miami Beach. During the summertime, he has served as principal cello of the Des Moines Metro Opera since 2017 and also performs at the Lakes Area Music Festival in Brainerd, Minnesota.

His musical travels have taken him to the Konzerthaus Berlin, Großes Festspielhaus at the Salzburg Festival, Hagia Irene in Istanbul, Palacio de Carlos V in the Alhambra, Suntory Hall, and Carnegie Hall. In 2016, his performance of the Ibert Concerto for Cello and Winds at the Spoleto Festival USA was featured on American Public Media’s Performance Today and was conducted by Oregon Symphony’s very own Norman Huynh. As a chamber musician, Kevin has performed alongside inspiring artists, including members of eighth blackbird, the Silk Road Ensemble, Yo-Yo Ma, Atar Arad, Christian Tetzlaff, Jorja Fleezanis, Eric Kim, Anne-Marie McDermott, Albrecht Mayer, Orion Weiss, Andy Akiho, Julia Bullock, Tamas Varga, and the most cherished musical colleagues across the world.

A native of the Chicago area, Kevin started his cello studies at age 10. He received his Bachelor of Music and Performance Diploma degrees from Indiana University studying under Eric Kim. There, he performed annually as a principal cellist, served as an associate instructor, and was a member of the Kuttner Quartet, the university’s resident honors ensemble.