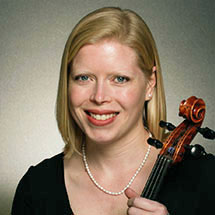 Violist Leah Ilem joined the Oregon Symphony in 2005. Prior to moving to Portland, Leah was a member of the Canton Symphony Orchestra, and performed with the Detroit Symphony and New World Symphony. She is also a former member of Chicago’s Grant Park Symphony and has performed at the Pikes Falls Chamber Music Festival in Vermont. In past summers, Leah attended the Taos School of Music, National Repertory Orchestra, and Encore School for Strings. Leah was also invited to take part in a performance of John Adams’ Chamber Symphony, which was conducted by the composer at Zankel Hall and broadcast on NPR.

Leah attended the Cleveland Institute of Music, where she earned both her B.M. and M.M. in Viola Performance. Her principal teachers were Robert Vernon, Jeffrey Irvine, and Lynne Ramsey. She also studied chamber music with Peter Salaff and the Cavani String Quartet.

While at CIM, Leah garnered a number of awards and honors. She received the Robert Vernon Prize for Viola Performance, the James Hall Award for Undergraduate Achievement, and the Horace and Marie Arnold Award in Viola. Leah was also chosen by the Virtu Foundation to receive a top-quality viola on loan from a private donor.

A native of Washington, Leah began playing the viola in her fifth grade public school orchestra. Today, she is an active private viola teacher and coach. In her spare time, Leah is an avid outdoor enthusiast and can be found hiking, mountaineering, cross country skiing, and canoeing in the mountains.