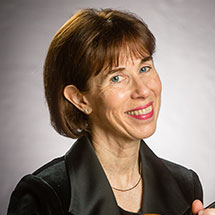 A native Oregonian, Lynne had the privilege of studying violin with renowned teacher Raphael Spiro. As a teenager, she was concert master of the Portland Youth Philharmonic; the opportunity to work further with Mr. Spiro inspired Lynne to stay in Portland and attend Lewis & Clark College.

After a rewarding year studying abroad in England and traveling throughout Europe, Lynne pursued a master’s degree in Violin Performance at the University of Oregon under Franciska Koscielny. During her graduate studies, Lynne also met her husband Ken Finch, currently a member of the cello section. As a student, Lynne performed with the National Repertoire Orchestra (Colorado) and the Banff School of Fine Arts (now the Banff Centre for Arts and Creativity in Alberta, Canada), where she worked with violinist Sidney Harth.

Today, Lynne spends her summers playing in the Chintimini Chamber Music Festival and the Oregon Bach Festival. She is very fond of spending time with her two adult children, a daughter who recently graduated from Oregon State University, and a son who is a filmmaker in Glendale, California.

When Lynne is not involved in music, she enjoys knitting, running, gardening, and downhill skiing.