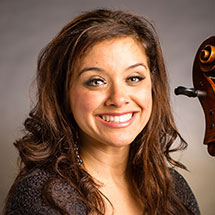 Before moving to San Antonio, Marilyn was a fellow of the New World Symphony in Miami, FL.  While in Miami, she served as principal cellist during tours to Teatro Santa Cecilia in Rome and to Carnegie Hall, all under the direction of Michael Tilson Thomas.

Since moving to the United States to pursue her musical career, Marilyn’s summer activities have included the Tanglewood Music Center (where she received the Karl Zeise Memorial Cello Prize), Spoleto Festival USA, the Kent/Blossom Music Center, the Youth Orchestra of the Americas and several European music festivals. She was also the Bronze Award Winner in the senior division of the 9th Annual Sphinx Competition in 2006.

Marilyn received her Bachelor of Music degree from Indiana University under cellist Emilio Colon and her Master of Music degree at Rice University with Norman Fischer.  Some of her live solo performances can be heard regularly on National Public Radio’s Performance Today.  Marilyn is married to Oregon Symphony cellist Trevor Fitzpatrick.