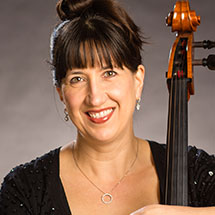 Nancy Ives joined the Oregon Symphony as principal cello in 2000, where she has been a featured soloist on numerous occasions. Before relocating to Portland, Nancy was based in New York City, where her diverse activities included working with new music groups such as North/South Consonance and Musicians Accord, and serving as principal cello for groups like the Manhattan Chamber Orchestra and American Chamber Opera Company. Nancy also appeared with Laurie Anderson and Gal Costa at the BAM Next Wave Festival, and with Naná Vasconcelos at The Knitting Factory and Merkin Hall. She combined acting with cello playing in an Off-Broadway production of Orpheus in Loveby Craig Lucas. Nancy can also be heard on soundtracks for the PBS series Nature and the Smithsonian, and has recorded with rock star Lenny Kravitz. While on tour with Phantom of the Opera, Nancy performed a comedy routine about the cello in AIDS benefits across the country.

Nancy holds a B.M. from the University of Kansas and earned both her M.M. and Doctor of Musical Arts from the Manhattan School of Music. She is currently Instructor of Chamber Music at Lewis & Clark College. A member of fEARnoMUSIC, with whom she recorded Somewhere I Have Never Traveled: the Music of Bonnie Miksch, Nancy performs frequently with Chamber Music Northwest, 45th Parallel, Portland Piano International Summer Festival, Third Angle, Pink Martini, and Portland Cello Project, which recently featured her composition, Shard, on an album. Nancy is a founder of Portland’s Classical Up Close, and has served on the Board of Directors of the Oregon Symphony. She spent a year as “Cellist in Residence” with OPB Radio’s arts magazine State of Wonder, and appears regularly on All Classical Portland to preview upcoming performances.