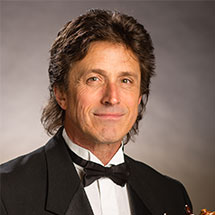 Peter’s first teachers were his parents Leah and Peter, who both played violin with the Oregon Symphony for many years. Peter has also studied with Lajos Balogh, Lawrence Maves of the University of Oregon, David Abel of the San Francisco Conservatory of Music, and has played for Dorothy DeLay and Henryk Szeryng.

Peter enjoys performing as a soloist, chamber musician, and recitalist. When not playing music, he enjoys golfing, running and weightlifting. Peter and his wife Laurie live in Beaverton.