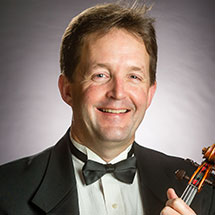 Violinist Ron Blessinger is an Oregon native and a proud graduate of Hermiston High School (’83). He received his B.M. from the Oberlin Conservatory and an M.M. with distinction in performance from the New England Conservatory of Music. After completing his master’s degree, Ron joined the Oregon Symphony in 1990. As a member of the orchestra, Ron has been a frequent soloist and chamber music performer. In 2014, he was elected as a player representative to the Oregon Symphony’s Board of Directors.

Ron is a passionate advocate for the music of living composers, both as a performer, artistic director, and now executive director for the acclaimed chamber music organization 45th Parallel Universe. Ron has performed on and served as executive producer for fourteen recordings of contemporary classical music, recorded a film score for Turner Classic Movies, and supports the work of regional composers via a commissioning program that has produced over 60 new musical works. For 17 myears as Third Angle’s artistic director, Ron collaborated with every major arts institution in Portland, including the Portland Art Museum, Portland Center Stage, Artist Repertory Theatre, Portland Institute for Contemporary Art, Oregon Symphony, Oregon Ballet Theatre, White Bird Dance Company, Jefferson Dancers, Architecture Foundation of Oregon, Lan Su Chinese Garden, the Japanese Garden, and Second Story Interactive, among others.

In addition to his symphony work, Ron is currently the executive director of 45th Parallel Universe, a performing arts collective of members of the Oregon Symphony. Working with the players and board, Ron has quadrupled the organization’s annual budget, doubled the number of performances, and overseen the production of groundbreaking music projects such as the recent “Les Boreades” concert, working with the PDX based virtual reality company Glowbox and artist Brad Johnson to create a virtual venue.

Ron and his wife Ann have two college-age children, Daniel and Erinn, and currently share their empty nest with dogs Jooge and Fly.