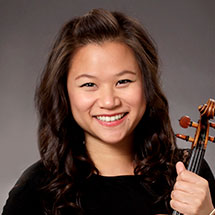 Canadian-Taiwanese violinist Ruby Chen began her musical training at a very young age. She quickly became recognized as an exceptionally talented violinist, and her family moved to North America to pursue her studies.

In 2003, Ruby entered the Eastman School of Music, where she received her B.M. and also earned the prestigious Performer’s Certificate. As a freshman at Eastman, Ruby won the school wide concerto competition and performed with the Eastman Philharmonia. Ruby later attended Yale University, where she earned both an M.M. and an Artist Diploma.

In addition to being a member of the Oregon Symphony, Ruby has worked as a freelance violinist in New York City and performed with some of the North America’s finest symphony orchestras, including Los Angeles, Toronto, Pittsburgh, San Diego, and New Haven. As an advocate of contemporary music and an active chamber musician, Ruby has worked closely with composers Elliott Carter, Mario Davidovsky, and Christopher Theofanidis, among others. A versatile violinist, Ruby has also performed with pop artists such as Josh Groban, and appeared on Celtic Thunder’s PBS special and Christmas DVD.

As a fellow at Tanglewood for three consecutive summers, Ruby served as concertmaster of the Tanglewood Music Center Orchestra, and in 2007 she received the Jules C. Reiner Violin Prize. Her primary teachers include Ani Kavafian, Mikhail Kopelman, and Arkady Yanivker. Ruby joined the Oregon Symphony in 2011 and feels fortunate to play with this amazing orchestra!