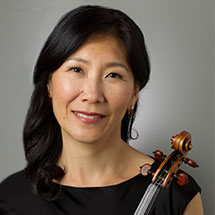 Appears as soloist on: The Power of Memories: Ravel and More with the Oregon Symphony

Sarah Kwak was appointed Concertmaster of the Oregon Symphony in 2012. Since then, she has performed to critical acclaim throughout Oregon. Hailed as a “world-class soloist,” Kwak is renowned for her “lyrical depth, thoughtful phrasing, myriad shadings of tone and easy technical prowess.” After her concerto debut with the Oregon Symphony, the Oregonian said she “tore it up in a performance as dazzling as any recent star guest soloist.”

Sarah joined the Oregon Symphony after serving as first Associate Concertmaster of the Minnesota Orchestra from 1988 to 2012 and Acting Concertmaster from January 2010 to September 2011. Kwak, a 2008 McKnight Artist Fellowship winner, has appeared with many orchestras as soloist including the Philadelphia Orchestra, Minnesota Orchestra, Houston Symphony, and Curtis Chamber Orchestra. The first artist ever to capture all three memorial awards at the Washington International Competition, Kwak also won the 1989 WAMSO Young Artist Competition. An avid chamber musician, she has toured nationally with “Musicians from Marlboro” and internationally with the Casa Verde Trio. She was a founding member of the Rosalyra String Quartet, which made its New York debut in 1996 and was awarded a McKnight Artist Fellowship in 2000. She has served on the faculty of Princeton University and at the University of Nevada at Reno.

She has participated in the Marlboro Music Festival, Chamber Music Northwest Festival, Portland Piano International Summer Festival, Pensacola Festival, Pittsburgh Summerfest, Bargemusic of New York, Festival Mozart in France, Siletz Bay and Astoria Festivals. In 2014, she was appointed Concertmaster of the Oregon Bach Festival and has toured with Asia Philharmonic Orchestra under Myung-Whun Chung. In addition, she has served as guest Concertmaster with the Utah Symphony.

Born in Boston and raised in Lawrence, Kansas, Kwak studied briefly at the Vienna Hochschule für Musik before entering the Curtis Institute of Music at the age of 12. Among her teachers were Joseph Sivo, Ivan Galamian, and Szymon Goldberg.

Kwak is a founding member and Executive Director of Classical Up Close, a non-profit organization whose mission is to to make classical music accessible to all by presenting free chamber music concerts in neighborhoods around the Portland metro area where people live, work and play.