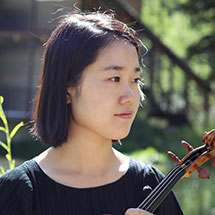 Shanshan Zeng, who is originally from Chengdu, China, began learning to play the violin at the age of four with her great aunt Wenyuan Chen at the Sichuan Conservatory of Music.

Shanshan participated in the Tanglewood Music Center Festival in 2011 and 2012, serving as concertmaster under the baton of Maestro Kurt Masur. Her other festivals have included the Valdres Festival in Norway, the Gonggeng Academy in China, the Schleswig-Holstein Musik Festival in Germany, and the Aspen Music Festival. She has collaborated with Maestro Christoph Eschenbach, Maestro Edo De Waart, cellist Qiang Tu of the New York Philharmonic, and violist Yunjie Liu of the San Francisco Symphony Orchestra. In addition, she performed with Yo-Yo Ma at the 38th Kennedy Center Honors (2015) honoring Maestro Seiji Ozawa.

Shanshan came to the United States as a full scholarship recipient to study at both San Domenico School and San Francisco Conservatory’s preparatory division in the fall of 2007, studying with Wei He. She played as a soloist and concertmaster with San Domenico’s Orchestra da Camera, which won the ASTA National Orchestra Festival Grand Champion in both 2008 and 2010. Additionally, she served as the concertmaster of the Preparatory Chamber Orchestra.

She is excited to have joined the Oregon Symphony in the fall of 2019.