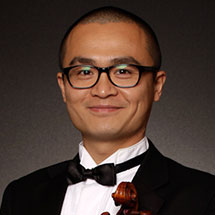 Chinese-born violist Silu Fei has enjoyed great acclaim as both an orchestral and chamber musician. Currently a member of the Oregon Symphony’s viola section, Silu has also played with the San Francisco Symphony, the New York String Seminar Orchestra (where he was principal viola), American Youth Orchestra, Young Musicians’ Foundation Debut Orchestra, and, as associate principal, the Schleswig-Holstein Music Festival Orchestra. While a member of the San Francisco Symphony led by Michael Tilson Thomas, Silu took part in the orchestra’s recording of Mahler’s Eighth Symphony, which won three Grammy Awards in 2009.

Silu has collaborated with renowned conductors including Christoph Eschenbach, Valery Gergiev, Kurt Masur, and Charles Dutoit, and, as a chamber musician, has performed with the principals of the Vienna Philharmonic, Berlin Philharmonic, and Cleveland Orchestra, and members of the Guarneri and Juilliard quartets. In a collaboration with Cleveland Orchestra principal clarinet Franklin Cohen, Fei was hailed by a local critic as producing “one of the most beautiful and lyric viola sounds ever heard.” In 2008, Fei appeared on the CD “Inner world,” featuring music of Los Angeles-based composer David Lefkowitz.

An educator as well as performer, Silu volunteered in the 2009-2010 season as a teacher and coach for the Youth Orchestra of Los Angeles and The Harmony Project, an L.A.-based non-profit dedicated to helping students from low-income families access music education.

Born in Chengdu, China, Silu began his musical training at age four, and pursued his undergraduate studies at the Shanghai Conservatory, where his principal teacher was Ms. Xidi Shen. As an undergrad, Silu won Third Prize in the National Viola Competition, was principal viola of the Shanghai Youth Orchestra, and represented the Shanghai Conservatory at the Pacific Music Festival in Japan. After earning his B.M. in 2005, Silu received a full scholarship to study with Paul Coletti in the Artist Diploma program at the Colburn School of Music in Los Angeles.