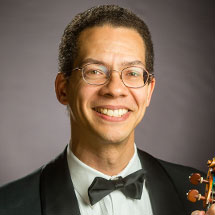 Vali Phillips joined the Oregon Symphony in 2012. Before moving to Portland, Vali was a longtime member of the Minnesota Orchestra, with whom he served as principal second violin for 11 seasons before joining the first violin section in 2008. Vali made his solo debut with Minnesota, performing Bruch’s First Violin Concerto in 2001; during his tenure, Vali also soloed with Dvořák’s Romance, the “Summer” concerto from Vivaldi’s The Four Seasons, and in 2007, Bach’s Double Violin Concerto with then-first associate concertmaster Sarah Kwak. During the Minnesota Orchestra’s Sommerfest 2004, Vali played Shostakovich’s Trio in E minor with pianist André Watts.

Before coming to Minnesota, Vali served as concertmaster of the Savannah Symphony Orchestra, and associate concertmaster for both the Erie Philharmonic, and the Charleston Symphony. As a soloist, Vali has appeared with the Boston Pops Esplanade Orchestra and the Buffalo Philharmonic Orchestra, as well as in recital at Carnegie Hall. Vali spent two summers at the Tanglewood Festival and has performed at the Grand Teton Music Festival.

Vali graduated from the Eastman School of Music, where he studied under Charles Castleman. He began his musical training at Project STEP (String Training and Education Program), a non-profit program for minority children in his native Boston. At Project STEP, Vali studied with artistic director Farhoud Moshfegh. As a way of giving back to the program that nurtured his early music studies, Vali performed a benefit recital for Project STEP at the New England Conservatory.

With three colleagues from the Minnesota Orchestra, Vali co-founded the Minneapolis Quartet, which won a McKnight Artist Fellowship in 2006.