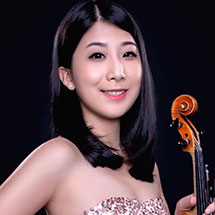 Born in China, Yuqi Li began her musical education at the age of six. She earned her bachelor’s degree from the Shanghai Conservatory of Music in 2014, studying with Xian He, and then came to the United States as a full scholarship recipient to study with Weigang Li, the first violinist of Shanghai Quartet, and received her artist diploma at the Montclair State University in 2016. Since then, Yuqi graduated from the Yale School of Music on a full scholarship with her master’s degree in May 2018, studying with Syoko Aki. She recently studied with Bing Wang at the USC Thornton School of Music while she was pursuing a graduate certificate.

Yuqi has made her solo debut as the winner of the Montclair State University’s Concerto Competition, giving a fantastic performance of Prokofiev’s Violin Concerto No. 2. She has won a variety of awards, including the third prize at the Violin Chinese Contemporary New Works Competition and the “Excellence Prize” at the third International Violin Master Class & Violin Sonata Competition while studying in Shanghai. Yuqi is also the finalist of 2018 National Classics Alive Artists Auditions. She was recently chosen as a winner of a Special Award at the Fourth Manhattan International Music Competition with a Silver Medal in the summer of 2019.

Yuqi participated in the Aspen Music Festival as a full scholarship fellowship violinist of the Aspen Conducting Academy Orchestra in 2016, under the baton of Maestro Robert Spano. In the summer of 2017, she was selected to perform at the Pacific Music Festival in Japan, where she collaborated with Maestro Valery Gergiev and members from major orchestras around the world, including the Berlin Philharmonic, Vienna Philharmonic, the Philadelphia Orchestra, and the Metropolitan Opera. Her other music festival appearances include the Asian Youth Orchestra in Hong Kong, the Pablo Casals Festival in France, and the Festival Art and Peace Master Class in Germany.

As an active orchestra musician, Yuqi was a member of the New Haven Symphony Orchestra from 2016–18. She has also served as the principal second violin of the Thornton School of Music Orchestra and the concertmaster of the Montclair State University Orchestra. As a passionate chamber musician, Yuqi worked with members of the Shanghai Quartet from 2014–16. She also performed as the first violinist with her string quartet in the Pablo Casals Festival and Red Rocks Festival Winter Chamber Music Institute in 2015.