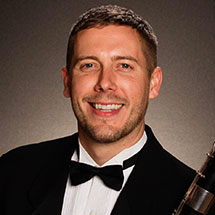 Originally from Portland, Maine, Adam Trussell now plays with the Oregon Symphony, and is thrilled to be a member of such a great orchestra in such a beautiful part of the country. Adam joined the Oregon Symphony in 2011, after serving as assistant principal bassoon with the Omaha Symphony for six seasons.

Adam has appeared with a number of orchestras, including the St. Louis, Seattle, Kansas City, and New World symphonies, as well as the Boston Philharmonic. Internationally, Adam has performed with the Moscow Chamber Orchestra, the Monterrey Symphony. During the summers, Adam has played with the Cabrillo Festival of Contemporary Music, Colorado Music Festival, Oregon Bach Festival, Breckenridge Music Festival, Bellingham Music Festival, the AIMS Festival (Austria), and the Danish Chamber Players.

Adam earned his B.M. at the New England Conservatory in Boston, where he studied with Gregg Henegar and Richard Svoboda. After graduating from NEC, Adam went on to Rice University’s Shepherd School of Music, where he earned his M.M. and studied with Benjamin Kamins.