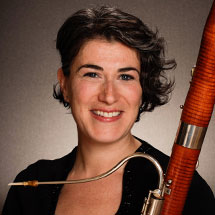 Carin studied with Frank Morelli and Whitney Crockett at The Juilliard School of Music; as an undergrad she also played with the innovative Wild Ginger Philharmonic. Carin completed an Advanced Certificate at the University of Southern California with Stephen Maxym, and earned her M.M. from the Shepherd School of Music, where she worked with her mentor, Benjamin Kamins. Carin also trained with Will Roberts, formerly of the Dallas Symphony, and was a Tanglewood Music Center Fellow in 2002 and 2003.

Carin has a strong interest in teaching; she is an adjunct professor at Reed College and maintains a private studio. She has also coached many young woodwind players through her involvement with the Portland Youth Philharmonic and Metropolitan Youth Symphonies, and Woodwinds @ Wallowa Lake, in eastern Oregon.

When she’s not playing music, you can find Carin hiking, camping, and skiing all over the Pacific Northwest. She also loves to cook, read, knit, garden, and spend time with her husband Matthew and son Elias.