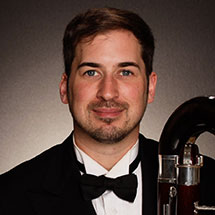 Evan Kuhlmann was born in Seattle, Washington. He graduated from Interlochen Arts Academy with Honors in Bassoon and English and The Juilliard School; where he earned a B.M. in Bassoon Performance with Scholastic Distinction as a student of Frank Morelli, a Graduate Diploma in Music Composition as a student of Robert Beaser, and the Peter Mennin Prize for Outstanding Achievement and Leadership in Music. Evan also studied bassoon with Francine Peterson, Barrick Stees, and Eric Stomberg; and composition with Samuel Jones, Stanley Wolfe, and Philip Lasser.

As assistant principal bassoon and contrabassoon with the Oregon Symphony, he has been praised for his “outstanding” playing (The Oregonian) and can be seen “rocking out” on a regular basis (Seen and Heard International). He has performed with numerous orchestras internationally including the St. Louis, San Diego, and Seattle Symphonies, the Orpheus Chamber Orchestra, Orchestra of St. Luke’s, All-Star Orchestra, and Orchestra of the Festival dei Due Mondi in Spoleto, Italy.

In 2000, Evan made his solo debut with the Seattle Symphony at Benaroya Hall. He has also performed as soloist with the Marrowstone Festival Orchestra, and with Jethro Tull’s Ian Anderson and the Oregon Symphony. Evan makes frequent appearances as a guest artist on local chamber and contemporary music series, as well as music festivals in the Northwest and beyond. As principal bassoon of the Cabrillo Festival Orchestra, he has performed countless premieres, including works of John Adams, Magnus Lindberg, James MacMillan, and Christopher Rouse.

A dedicated teacher, Evan is a faculty member at Portland State University and Woodwinds @ Wallowa Lake, and maintains a private studio. He has also taught at the Marrowstone Music Festival and coached the bassoonists of the Filarmónica Joven de Colombia, Portland Youth Philharmonic, and Metropolitan Youth Symphony.