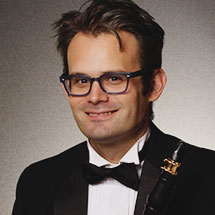 James Shields joined the Oregon Symphony in the autumn of 2016. Before relocating to Portland, James was principal clarinet of the Canadian Opera Company in Toronto, as well as the New Mexico Philharmonic in Albuquerque. A graduate of The Juilliard School (B.M., Clarinet Performance) James studied with Ricardo Morales, principal clarinet of the Philadelphia Orchestra.

James has appeared as a soloist with the New Mexico Philharmonic, Interlochen’s World Youth Symphony Orchestra (MI), and the Albuquerque Philharmonic, and as guest principal clarinet with the Philadelphia Orchestra, the Malaysian Philharmonic Orchestra, Aspen Music Festival, and Santa Fe Pro Musica. As co-artistic director of Chatter, an Albuquerque-based chamber music organization that presents more than 60 concerts per year, James appears frequently as a soloist, chamber musician, composer, conductor, and concert host.

In addition to his performing activities, James holds an M.M. in composition from the University of New Mexico. He continues to compose regularly, and his works have been performed at venues in New York and Albuquerque.