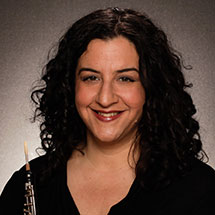 Karen Wagner joined the Oregon Symphony in 1999 as assistant principal/second oboe. Since arriving in Portland, she has maintained a robust private studio, where she coaches young musicians of the Metropolitan Youth Symphony and the Portland Youth Philharmonic.

In addition to her teaching, Karen also enjoys the many opportunities to make music throughout the region. She has performed with Portland-based chamber music ensemble 45th Parallel, and Portland’s contemporary music ensembles Third Angle and fEARnoMUSIC. Karen has also appeared with Chamber Music Northwest, the Oregon Bach Festival, and the Oregon Ballet Theatre Orchestra. For the past 17 seasons, Karen has also served as principal oboe with the Cabrillo Festival of Contemporary Music.

Karen earned a B.M. from the State University of New York at Buffalo, and nearly completed an M.M. at the University of Southern California before she headed off to play with the Louisville Orchestra and the New World Symphony in Miami Beach.

Karen is a student of Allan Vogel, Ronald Richards and worked extensively with oboist John de Lancie when she was a fellow at the Aspen Music Festival. Karen lives in SE Portland with her husband Dave, where they enjoy all that the Pacific Northwest has to offer.