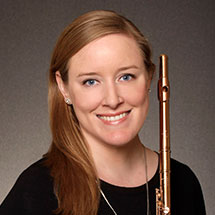 Martha Conwell Long joined the Oregon Symphony as principal flute at the beginning of the 2016-2017 season. Before moving to Portland, Martha was principal flute with the San Antonio Symphony for four seasons and appeared several times as a soloist with that orchestra, performing works by Bach, Mozart, and Telemann.

Martha received a B.M. from the Colburn School in Los Angeles, where she studied with Jim Walker. She continued her studies at the New England Conservatory in Boston, where she completed a Graduate Diploma as a student of Elizabeth Rowe. While in school, Martha furthered her orchestral studies during summers at Music Academy of the West and Tanglewood Music Center. After two summers as a fellow at Tanglewood, Martha was invited to return in 2012 and 2015 as a New Fromm Player, working closely with the composition fellows and focusing on the study and performance of contemporary music. As an undergraduate at Colburn, Martha was named principal flute of the Fort Collins Symphony Orchestra in Colorado, a position she held for three years before she moved to San Antonio. She has also guested with the Colorado Symphony and served as principal flute of the Oregon Bach Festival.