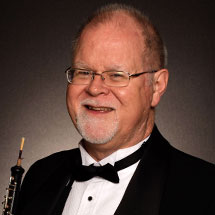 Martin Hébert has served as the principal oboe of the Oregon Symphony since his appointment in 2006. Previously, he held that position with the Florida Orchestra, the Savannah Symphony Orchestra, and the Mexico City Philharmonic. Martin has also performed as guest principal oboe with the Pittsburgh Symphony, the Atlanta Symphony, and the Grant Park Music Festival Orchestra in Chicago.

Born in Cleveland, Martin attended the Cleveland Institute of Music, where he studied with John Mack, principal oboe of the Cleveland Orchestra.

Martin has been a featured soloist with the Oregon Symphony, as well as with other ensembles throughout the United States and Mexico. From 2002-2005, he was an Artist in Residence and soloist with the Crested Butte Music Festival in Colorado.

In addition to his orchestral experience, Martin has played with opera and ballet companies in Portland, Honolulu, Atlanta, Tampa, Savannah, and Cleveland. As a chamber musician, he has performed in Oregon with Chamber Music Northwest, fEARnoMUSIC, Third Angle, and the Oregon Bach Festival.

Music is the Hébert family business. Martin’s father William was principal piccolo of the Cleveland Orchestra for 41 years, while his uncle Richard is the former principal bassoon of the Metropolitan Opera Orchestra; Martin’s brother Britton is a freelance bassoonist.

Martin has toured with orchestras in Japan, Hong Kong, Western Europe, and South America. He has recorded with the Mexico City Philharmonic on Decca, the Atlanta Symphony on Telarc, and the Oregon Symphony on Pentatone.

Active as a teacher, adjudicator, and clinician, Hébert maintains a private studio of pupils, and he coaches youth groups across Oregon.

When not performing, teaching or making reeds, Martin enjoys bicycling, theater and hiking in the magnificent Columbia Gorge.